Amazon's THE BOYS: deconstructing superheroes in this rollicking, rowdy series

The superheroes of “The Boys“, a 2019 Amazon Studios TV series, are not very nice people. The world at large believes the heroes of the super group “The Seven” are fantastically powered people with high standards of life your typical super hero will have.

But the truth is they are arrogant, sadistic killers, corrupted by their abilities, all controlled by a corporation that cares more about making money than saving the world.

“The Boys” of this series are a group of vigilantes determined to put an end to this super team, to expose them to the world for what they are. Unfortunately for these people, their enemy is led by “Homelander”.  He is a combination of Captain America and Superman, a simpleton easily controlled and manipulated by the corporate leader, played quite nefariously by Elizabeth Shue.

Homelander is…..the scariest fictional character to come across the screen in years. There’s no other way to put it.

This series packs a little bit of everything into each of it’s 60 minute episodes. It is massively violent, with frightfully explosive moments of carnage and blood. It mixes in multiple, related storylines all leading towards a satisfying season one climax, and offers plenty of humor to off-set the overall dark tone of the show.

The program is based on the comic book series of the same name, created by award-winning writer Garth Ennis. If you enjoyed his other television adaption, AMC’s “The Preacher”, then you’ll have some idea what to expect with this one.

THE BOYS SYNOPSIS: The series primarily focuses on two groups: the titular Boys, vigilantes looking to keep the corrupted heroes under control, and the Seven, Vought International’s premier superhero team. The Boys are led by Billy Butcher, who despises all superpowered people, and the Seven are led by the egotistical and unstable Homelander.

Season One and two available on Amazon Prime

The interesting thing is…..it may be hard to believe, but “The Boys” television series is in fact a scaled back version of the absolute, unfiltered mayhem and bloodshed seen in the 72 issue run of the comic book series. It was so wildly groundbreaking with its violence and sexuality, combined with the blatantly open parody of the super hero concept, the series was canceled by its original publisher, Wildstorm Productions, a DC Comics owned company, after just six issues.

While searching for a new home, and granted the opportunity by DC Comics to take its story to another publisher, it’s creator Garth Ennis describes in this interview what exactly caused the rift to take place in the first place:

When you have comics that—even superficially—look a bit too much like the company’s regular output, and the characters in them are doing the most ghastly things and behaving in the most awful way, and blaspheming and swearing and so on, that creates a real problem. That just will not fly.

And that, more than anything else, was what brought an end to The Boys time at DC.”

Season One was such a success that Season Two was green-lighted even before the series was released on Amazon’s video service. Let’s just say this second season was a head-splitting extravaganza, another wildly unpredictable, blood-soaked series of  events, storylines,  and rock and roll fueled mayhem, all of it capturing the same unfiltered humor and debauchery we witnessed throughout its first stunning season.  With season three fully into productions during 2021 and a spin-off series in the works, fans of the comic book series and the Amazon show have a lot to look forward to.

Let’s take a look at this incredibly impactful and expanding comic book history.

THE BOYS ISSUE NUMBER 1     October 2006   Wildstorm Productions  – Here it is, issue # 1.  This would be one of six ground breaking issues released under the Wildstorm brand until the series was briefly shut down. It would eventually find it’s new home at Dynamite Entertainment.

First appearances: Hughie Campbell, Billy Butcher, Terror (Yes, Billy’s dog first appeared in this issue!) and of course A-Train first appears here. Just like in the opening moments of the first episode of season one, A-Train and Hughie cross paths in an unfortunate way during the first few panels of this first issue.

Recent Ebay sales include this CGC 9.8 graded copy, sold on Ebay for $464 dollars. 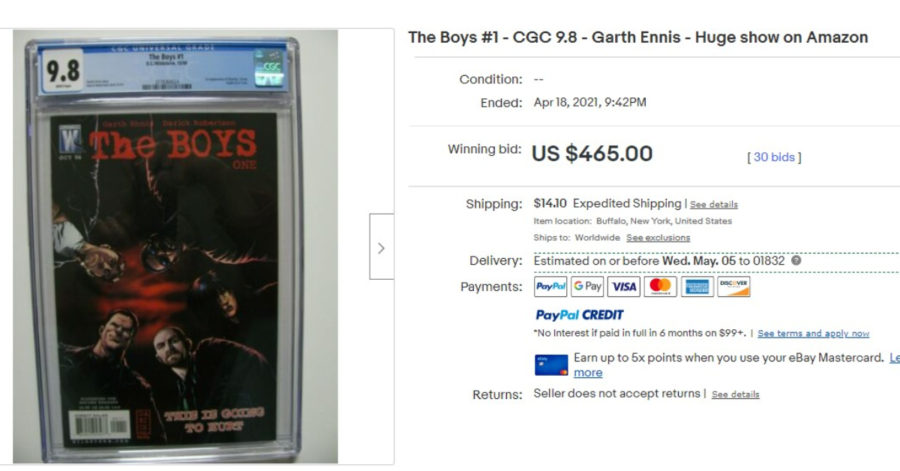 THE BOYS ISSUE NUMBER 2     This issue would bring more important first appearances, and we still haven’t even seen the majority of the Seven. The world building of The Boys universe continues, with three characters introduced, including two who play major roles in the Amazon series:  The Frenchman, The Female, and Mother’s Milk appear here for the first time.  A recent CGC 9.8 sale (March 2021) of this issue sold for $149.95.

THE BOYS ISSUE NUMBER 3     ‘The Seven’ have arrived.   The all powerful, much loved ‘superhero’ team finally are introduced, and the comic book medium will never be the same.   Beloved by all, little does the world know the truth behind these twisted heroes.

Check out this list of first appearances:  The super-team The Seven. Homelander. Black Noir. Queen Maeve. Starlight. All of the major players from the Amazon television series appear in this issue #3 for the first time, and the marketplace is very much aware of this, as you can see if your trying to get your hands on this key issue. A March 18 CGC 9.8 copy of this issue sold for $349.95 on Ebay. 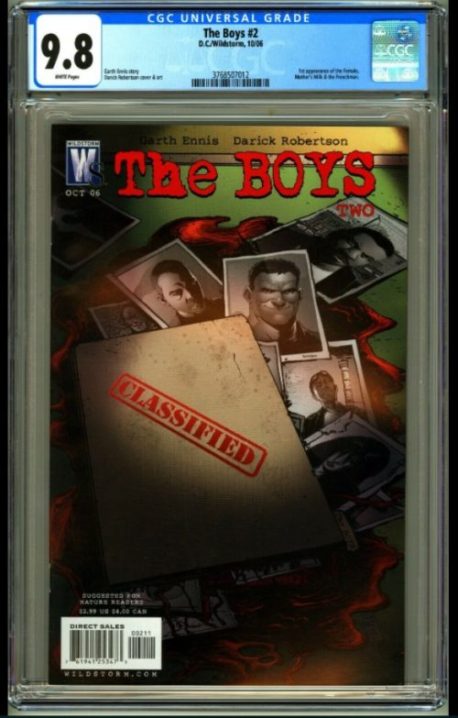 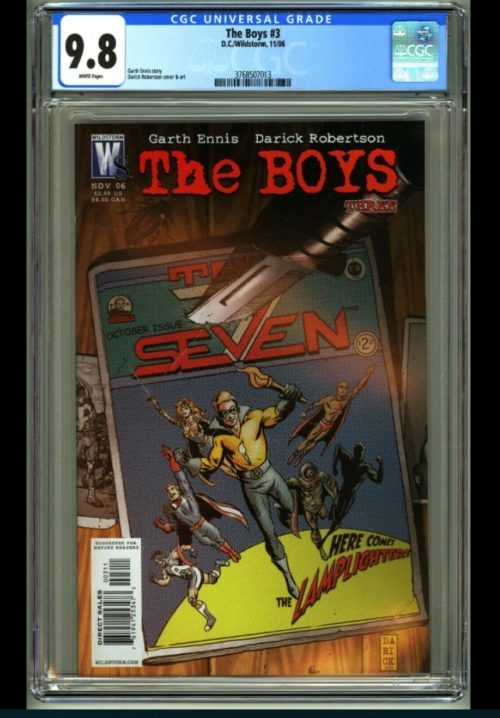 FROM THE COMIC BOOK PAGES………..Source material vs the TV show

Homelander and the rest of the Seven attempt to save a plane full of hostages, and things do not go well.

Here’s a good example of how the show and the original source material differ.

In both cases, the comic book version and the live action program show how the ‘heroes’ overlook collateral damage and are more interested in destroying any evidence that will hide their true nature, regardless of the loss of human life.

Screenrant.com does an excellent job of summarizing this key early scene from the Amazon series.

Homelander and the rest of the Seven attempt to save a plane full of hostages, and things do not go well.

A good example of how the show and the original source material differ.

Both versions show how the 'heroes' overlook collateral damage, and are more interested in destroying any evidence that will hide their true nature, regardless of the loss of human life.

Screenrant.com does an excellent job of summarizing this key early scene from the Amazon series.

Click on the comics panel to get to their story.

MY TEN YEAR COMIC BOOK JOURNEY: WHAT IT WAS LIKE COLLECTING COMICS DURING THE GREAT 1980’s