After years of watching and reading a few of my favorite things, it’s time to write about them. Movies and television, with a focus on comic book characters and stories filling up our movie theaters and TV screens.

Here’s the story about how all of this started, beginning with a random trip to a corner store in 1979.

Thank you for joining us here.

It's a Multiverse of Madness: The Mighty Thor Meets Conan The Barbarian

As a collector throughout much of the 1980’s, I’m always looking at selling prices for comics released during this period of time. There are plenty of blue chip books from the 80’s, but its much more fun finding value in unexpected places.

Let’s take a look at one of the 1980 issues and a very surprising high dollar sale on one of the world’s largest auction sites.

WHAT IF #39: What if Thor Battled Conan? The first meeting between the Mighty Thor and Conan the Barbarian.

“CBCS”:  The acronym for the next most popular grading company, the Comic Book Certification Service, a major competitor to CGC.

WHAT IF THE MIGHTY THOR BATTLED CONAN THE BARBARIAN?

From 1983, here's What If? Volume 1, Issue # 39. This is my copy, picked off the shelf as a teenager. While it could potentially produce a high grade at CGC, it is highly unlikely it would land the coveted 9.8 grade. All it takes is a couple of very small blemishes to reduce it down to a lower graded comic book.

Thanks to the Disney Plus animated series “What if?”, the market is now very interested in this alternate-universe series first introduced by Marvel Comics in 19777, a series that has generally been under-valued over the years. The first volume of this series ran for 47 issues, it’s second volume would last 115 issues. Since that time Marvel Comics has continued these alternate universe stories in a series of primarily one-shot stories.

With Marvel officially kicking off a multi-verse version of the Marvel Cinematic Universe, as seen in the Disney+ series “Loki”, combined with the now aptly title Doctor Strange sequel arriving in 2022 (“Doctor Strange in the Multiverse of Madness”), collectors and investors are now extremely interested in this “What If” comic book series, with the highest graded books making some serious noise in the marketplace.

This sale is quite an eye-opener, and I certainly find it quite shocking.

This is the Heritage Auctions link to their homepage. You need to sign up for a free membership to see this sale.

Here’s a screenshot of this rather incredible sale. 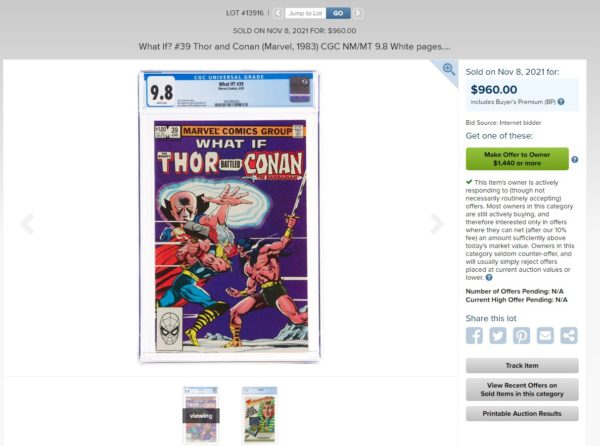 This issue presents the first and only meeting of the God of Thunder and the greatest warrior of Earth’s Hyborian Age, Conan of Cimmeria, making it a truly unique issue.

While I am an owner of What If #39, it is important to remember this particular sale was for one of the highest grades possible, a CGC 9.8. These 9.8 grades (or better, of course) are the crown jewel for collectors and investors and this stunner of a sale is a great example of how a unique high grade issue from the 1980’s can generate surprising high dollar sales.

Here’s the Google Web Story version of this post. 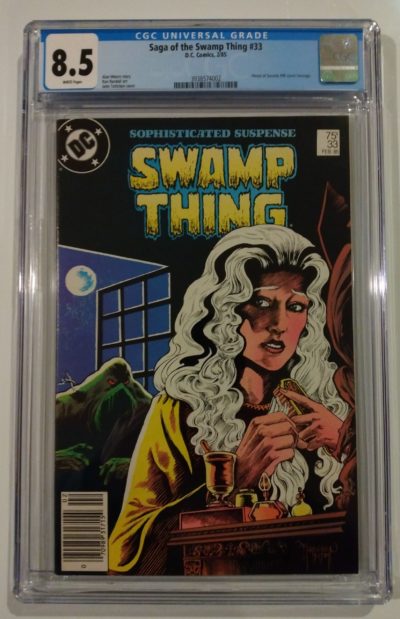