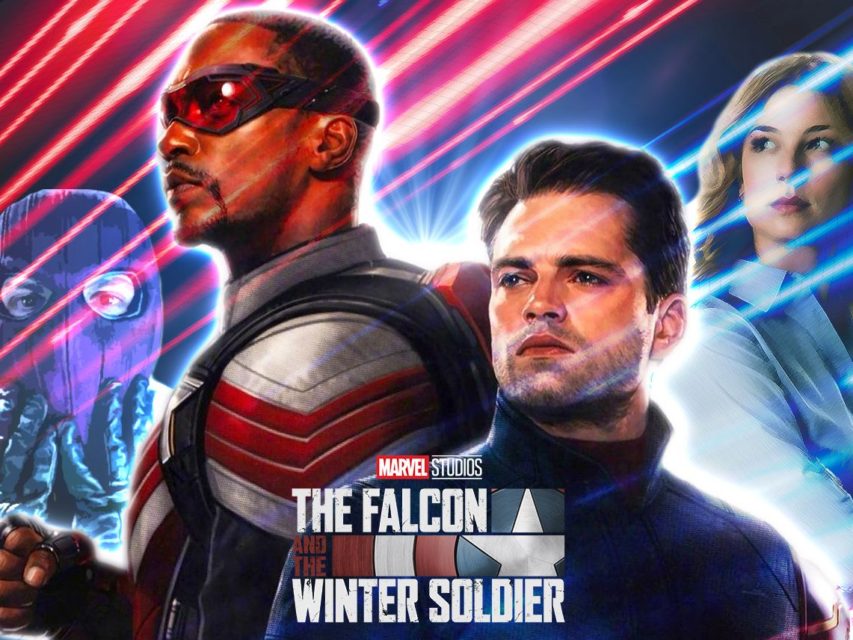 The Marvel Cinematic Universe has shifted to the small screen, and there is no end in sight to the potential number of stories and characters we’ll see introduced to the MCU. With the incredible success of the Disney+ series Wandavision and the storylines it introduced, it is clear we have a lot to look forward to.

THE FALCON AND THE WINTER SOLDIER DISNEY+ TV SERIES

On March 19, 2021, Disney+ launches it’s next major MCU-centric title, with The Falcon and the Winter Soldier. Much to the delight of Marvel fans everywhere, Howard Mackie as Sam Wilson / The Falcon and Sebastian Stan as Bucky Barnes / The Winter Soldier are teaming up this in action packed series.  Let’s take a look at the rumors and expectations, as well as some of the most impactful original source material stories, and their current values.

Here’s what we can look forward to.

Howard Mackie returns as The Falcon. With Captain America giving up his shield as seen at the climax of Avengers: Endgame, it was implied at the time that The Falcon would be next in line to wear the shield, which followers of the comic the Marvel Universe know did take place in the Captain America comic book series.

Heading into this Disney+ series, we really can’t be sure who will end up wearing the coveted iconic shield.  Marvel Studios President Kevin Feige never likes to be predictable, so let’s get ready for a thrilling battle for the stars and stripes shield.

As Feige described in this recent Variety interview, this show will provide some much needed depth and background to the Sam Wilson character:

“He’s a man, and he’s an African American man. He’s got experience in the military, he’s got experience doing grief counseling with soldiers with PTSD. That’s how Steve Rogers initially developed this friendship with him. What’s so great about the move to Disney Plus long form is that we get to see much more of these characters. Mackie has this amazing presence, whether he’s on screen for six seconds or six hours. In “Endgame,” it was closer to six seconds. All along we’ve been asking, “Where did he grow up? Who is his family?” We want to know more about this guy being thrown into this situation and handling it spectacularly well considering he’s just a man. That’s what the show is about. This man, this Black man in particular, in the Marvel version of the world outside our window.”

The Falcon first appeared in the pages of Marvel's Captain America series, volume 1, issue # 117, published September 1969. It was a collector's item for years, but it was the Falcon's introduction to the MCU that really increased the attention to this issue. Add on a TV series with the name "Falcon" emblazoned on it, and we have a very hot back issue comic book, the type of book that should remain a worthy investment going forward. Recent EBay sales history: a CGC 9.0 sold for $1100 on February 6, 2021.

The Falcon becomes the new Captain America. This issue is the conclusion of the saga called the "Tomorrow Soldier", in a battle against long time villains Arnim Zola and the Red Skull. With a legion of Marvel heroes watching, Steve Rogers steps down and hands over the Captain America shield to Sam Wilson.
Recent EBay sales history: a CGC 9.8 sold for $355.91 on March 9, 2021.

THE WINTER SOLDIER IS BACK

The other main lead is the childhood friend of Steve Rogers who we met back in 2011’s Captain America: the First Avenger:  Bucky Barnes, now known as the Winter Soldier, played by Sebastian Shaw.

As described in this Direct.com article discussing Sebastian Shaw’s perspective on his character arc, we going to see sides of the character never seen previously:

“You’ve got to remember, his whole family was Steve Rogers, so now there’s a real loneliness to the guy in a lot of ways. It was really interesting to explore all those parts that we’ve never gotten the chance to do. And to have six hours to be able to do that was really fun, because it shows so many different sides of the character we hadn’t ever seen before.”

After a cameo appearance in issue #1 of the fifth volume of Captain America's series, launched in 2005, the Winter Soldier is credited with his first full appearance in issue #6 of the series, as part of the "Out of Time" story arc. Recent Ebay sales include a CGC 9.8, which sold for $499 on Feb. 14.

FAMILIAR CHARACTERS ARE BACK IN THE MARVEL CINEMATIC UNIVERSE

As seen in the series trailers, also coming back to the screen is Sharon Carter, aka: Agent 13, once again portrayed by Emily VanCamp. We haven’t seen Sharon since her last appearance in Captain America: Civil War, but it’s clear she can be expected to play a significant role during the Falcon and Winter Soldier series.

Agent 13 was created by the dynamic duo of Marvel’s early days, Stan Lee and Jack Kirby, way back in issue #75 of the 1960’s series Tales Of Suspense.

This issue also included the first appearance of another MCU character, Batroc the Leaper, played on the big screen by Georges St-Pierre in Captain America: The Winter Soldier.  We don’t know how much of a role he will play in the Falcon and the Winter Soldier, but Batroc is expected to appear during the upcoming Disney+ series. 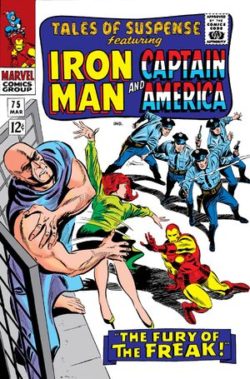 Tales of Suspense #75: Published in March of 1966, at that time Tales of Suspense was a monthly book with stories shared by Iron Man and Captain America. Recent Ebay sales include a sale on February 7 for a CGC 7.5 graded book, selling for $102. 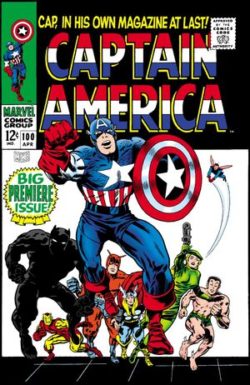 This series dives deep into the well of Marvel Comics history with the introduction of a new character, John Walker, played by  Wyatt Russell (Lodge 49, Overlord, Shimmer Lake), the son of Kurt Russell and Goldie Hawn.

John Walker is introduced in Captain America #323 (November, 1986) as the Super Patriot, a rival and outspoken critic of Captain America. When a frustrated Steve Rogers becomes disenchanted with the way Captain America’s symbol has become too attached to political agendas, Steve resigns as Captain America. The U.S government’s search for the next person to wear the shield leads them to John Walker, bypassing candidates with much greater ethics and principles, such as Nick Fury and Sam Wilson.

In issue number 333 of Captain America, walker is crowned as the new Captain America, nick named “The Captain”. This violent, often reckless version of the iconic Marvel character eventually gives way to the return of Steve Rogers, and Walker takes on a new role, called U.S. Agent during issue number 54.   The U. S. Agent is a government controlled “super agent” who will become a major character in storylines throughout Marvel Comics during the next two decades.

With all of this background, it is clear that the John Walker of the Falcon and the Winter Soldier will be battling Sam Wilson and Bucky Barnes for ownership of the Captain America shield. The trailers show Walker wearing the Captain America uniform, running into a packed stadium, cheered on by the fans surrounded by USA flags, banners, cheerleaders, and dancers.  We can be sure this will be just one of the sub-plots of the show. 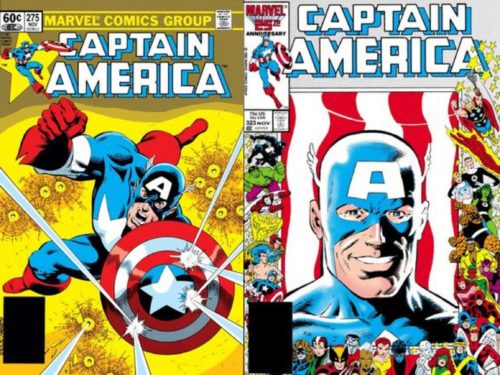 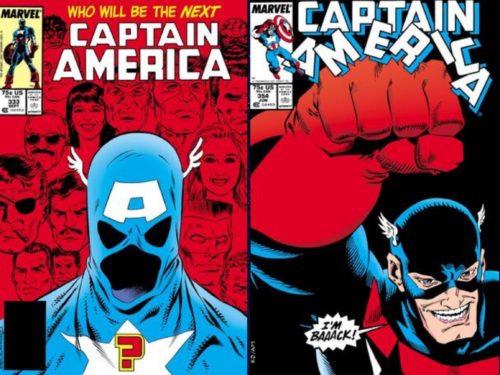 For the full list of Falcon and the Winter Soldiers key issues, KeyCollectorscomics.com has a complete summary here.

A superhero story requires a big bad, and we do have another returning villain expected to play that role in the Falcon series: Daniel Bruhl returns as Baron Helmut Zemo, reprising his role from Captain America: Civil War. But this time, Zemo is going next-level, as he will be donning the classic purple helmet made famous by his father.  As we can see in this series promo called ‘Honor’, Zemo is back and is not happy.

Heinrich Zemo, father of Helmut, was the classic evil villain of 1960’s era Marvel Comics, appearing for the first time in one of the all-time most iconic comics book ever made, the classic Avengers #4. Along with that stunning Jack Kirby cover, this was the early Avengers issue that brought back from his ice-borne hibernation the man himself, as the Captain America of the 1940’s Timely Comics era would return to the four-color comics on this March 4, 1964 issue. “Captain America Lives Again” the cover screams to an audience that at the time probably could not imagine the value and impact this issue would have more than 60 years later. 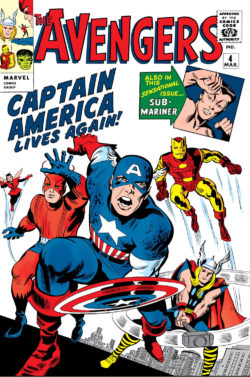 If your looking to own a magnificent piece of history related to the Captain America legacy, here it is: Avengers #4, from 1964.

In January 2021, a 9.0 copy sold for $6751. Quite frankly, for a high-grade copy of this issue, that seems like a pretty good deal. This is the type of blue-chip comic book that consistently increases in value as time goes by.

My Ten Year Comic Book Journey: What it was like collecting comics during the great comics era of the 1980’s.

The Falcon and the Winter Soldier: Power Brokers, Flag Smashers and the newest Super Soldier.

Highlighting the original source material and the new characters introduced during the first three episodes of the Disney+ series.

WANDAVISION:  Are we seeing the arrival of the multiverse?

Marvel’s first TV series has arrived, and it’s a game-changer.

As discussed in their recent article here, Forbes is calling it the most on-demand program on Earth, vaulting the program to number one overall on all platforms since Episode 5.

Easter egg alert!   Wandavision may have broken the record for the number of easter eggs the audience needs to figure out. Collider provides a comprehensive summary here, through eight episodes.