The Marvel Cinematic Universe has shifted to the small screen, and there is no end in sight to the potential number of stories and characters we’ll see introduced to the MCU. With the incredible success of the Disney+ series Wandavision and the storylines it introduced, it is clear we have a lot to look forward to.

THE POWER BROKER: Who is this latest new addition to the MCU?

The Marvel Cinematic Universe has added an army of super-soldiers to the storyline, and a group led by a person called “The Power Broker” are behind it. This secretive organization have given members of the group called “The Flag Smashers” their super-strength powers via a serum similar, or duplicated from, the Super Soldier Serum that created Captain America.  But what exactly is a “Power Broker”?

In the pages of Marvel Comics, the character who would end up with this moniker first appeared in the pages of the Machine Man series of the 1970s, issue #7, published November of 1978. In this issue, the “Power Broker” is Curtiss Jackson, a member of the criminal organization known as The Corporation. Eventually, Jackson creates the Power Broker Corporation, a business willing to sell  its strength augmentation formulas to the highest bidder.

It makes sense that Marvel Studios would choose this person/organization as one of the key new additions to the MCU. One of the themes of The Falcon and the Winter Soldier is the re-introduction of the Super Soldier Serum into the MCU, so the Power Broker is the perfect candidate to have control of this powerful, game-changing formula.

So far, we do not know who the Power Broker is in this Disney+ version of the character. But you can be sure the big reveal will end up having huge implications for future film and television series of the Marvel Cinematic Universe.

Machine Man is another character created by the legendary hands of Jack Kirby. a mostly under appreciated series from the 1970's era of Marvel Comics, it is back on the radar once again thanks to the introduction of the Power Broker. This fairly pedestrian issue from the Machine Man series is another example of the impact of film and television on the current collectibles market.

There are very few examples of sold graded copies of this issue, simply because up to now it has not been in high demand. That has certainly changed as of April 2021.

We now have one significant sale to report, completed on April 7. This CGC 9.8 copy sold for an eye-popping $1288.88! Truly amazing.

THE FLAG SMASHERS: Do the ends justify the means?

By now we know the Flag Smashers are the main antagonists of this Disney+ series. Let’s dive into their comic book origins.

Another Captain America centric villain, the Flag Smasher first appeared in Captain America volume 1, issue #312. Unlike the MCU version, the Flag Smasher is one person, the anti-nationalist terrorist Karl Morgenthau, a violent hate-filled fanatic, the polar opposite of everything Captain America represented. Karl’s hatred was not directed only at the United States. He hated the very essence of the word ‘country’, feeling that the concept of flags and borders created dangerous nationalistic pride and superiority.

He had a literal “flag smashing” introduction during his first appearance in Marvel Comics, flying his plane into the flags of the United Nations Plaza! Over the years, he would fail in his efforts to promote world peace through violence, but it is easy to see how the concept of his ideas could be utilized within the arc of the Marvel Cinematic Universe.

Instead of a single person taking on this role, the Flag Smashers of the MCU are an organization borne out of the chaos resulting from the return of half the world’s population, as seen in Avengers: Endgame  They are well-organized anarchists, spreading their belief through massive social media campaigns and high profile acts of violence that the world was a better place during the five year “blip” when it was “unified without borders”.

Their leader is Karli Morgenthau, playing the role of the villain in this series, but fighting for things most people would consider proper goals, such as globally unified communities, and employment and housing for all. The problem is their use of violence to justify this end.

As described by the person playing Karli, Erin Kellyman, in this recent interview on TVLine:

“The people who remained kind of came together and supported each other lot more because of the traumatic event — half of the population disappearing — and the borders were open, and people came together, and there was more unity. That’s what she’s trying to replicate that again, but with everybody this time.”

The "Flag Smasher" we see in The Falcon and Winter Soldier is the not same person first introduced in this issue, but the concept remains the same. As expected, the value of this 1985 issue has jumped up in 2021, and most likely will continue to have high demand in the market. Latest Ebay sale (March 25): a CGC 9.6 sold for $400.

ISAIAH BRADLEY: 'TRUTH' is now part of the MCU

Episode 3 of The Falcon and the Winter Soldier series launched one of the biggest and boldest shockers of recent MCU history:

We now know that Steve Rogers and Bucky Barnes are not the only Super Soldiers.

This seven-issue limited series tells a brutally harrowing story of 1940’s America. Hundreds of American Black soldiers are selected to be test subjects for the U.S. Army’s latest Super Soldier Program. We know that the blond-haired, blue-eyed Steve Rogers was the first and only recipient of the original version of the Super Soldier Serum. But the Army is determined to re-create the lost formula and is willing to sacrifice the lives of three hundred Black men in order to accomplish this goal.

Isaiah Bradley is the main character in the series, and would be the last of the ‘volunteers’ to survive the experiments, eventually donning a Captain America uniform and fighting the Nazis in Europe at the height of World War II.

Of course, because of his skin color, he is charged with stealing the Captain America uniform, court martialed, and jailed. This is a powerful, and necessary story, and it’s refreshing that Marvel Studios has introduced the character of Isaiah Bradley to the Marvel Cinematic Universe.

Here’s a very well done full summary of the series by the folks at Comicsbeat.com.

As seen in the third installment of The Falcon and the Winter Soldier, Isaiah and his incredible story is now part of the Marvel Cinematic Universe.  Not only that, but we also saw the appearance of his grandson, Eli, and he was not there for any random reason.  He played a major role in Marvel Comics, and for sure we can expect to see him in the future. 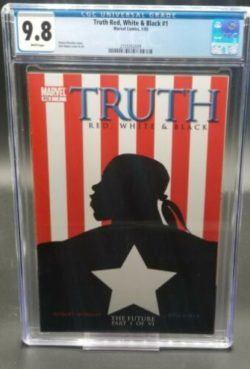 This ground breaking series was released in 2003, so there are plenty of high grade books available on the market.  And they are selling big time, thanks to the push from the appearance of Isaiah Bradley in the Falcon and the Winter Soldier.

A new addition to the MCU did arrive during episode 5.

The question is: who exactly is Contessa Valentina Allegra De Fontaine?

MY TEN YEAR COMIC BOOK JOURNEY: WHAT IT WAS LIKE COLLECTING COMICS DURING THE GREAT 1980’s

Be sure to check out Vedafy’s perspective on the Falcon and the Winter Soldier, including all of the back issues impacted by this Disney+ series.

THE FALCON AND THE WINTER SOLDIER: THE HEROES, THE VILLAINS, AND THE BACK ISSUES