KINDLE MOVIE CORNER: The House of Sand and Fog, by Andre Dubus III

Over the years, Hollywood has adapted countless books into movies and television series. Our goal here is to highlight adapted novels worthy of your attention.

One of New England’s most voracious readers, Margie O’Brien, a long time resident of Saugus, Massachusetts, has become part of the Vedafy team, and will share her perspectives on Hollywood hits that were inspired by her favorite authors and stories.

THE HOUSE OF SAND AND FOG by Andre Dubus III 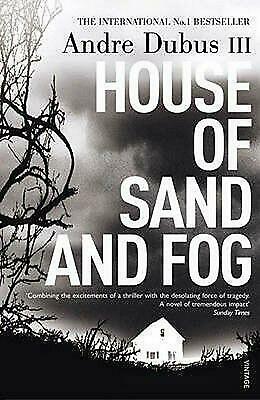 Synopsis:  Three fragile yet determined people become entangled in an escalating crisis over the same small house. Combining unadorned realism with profound empathy, House of Sand and Fog is a devastating exploration of the American Dream gone awry.

“Like great fiction, ‘House of Sand and Fog’ sees into the hearts of its characters, and loves and pities them. It is based on a novel by Andre Dubus III, and there must have been pressure to cheapen and simplify it into a formula of good and evil. But no. It stands with integrity and breaks our hearts.”

“While maintaining the book’s delicate balance and a fair measure of its tension, which perceptibly sags around the mid-way point but later picks up again, Perelman has made a film dominated more than anything by its actors. The casting is well-nigh perfect from top to bottom.“

The Writer: Andre Dubus III has earned multiple writing awards, including the National Magazine Award for Fiction, as well as the Literature Award from the American Academy of Arts and Letters.

Released in February of 1999, The House of Sand and Fog was one of five finalists for the 1999 National Book Awards for Fiction, presented every year by the National Book Association.  The author, a long time New England resident, has another novel in development in Hollywood, his follow-up to this book, called The Garden of Last Days.

“We are all acutely aware of the acts of racism around us. The House of Sand and Fog details what happens when there’s a misunderstanding between a woman from California and an Iranian immigrant. The book unleashes individual reflective emotions as the story and tension escalate. As each side unveils their reason to be living in the house, my emotions went on a roller coaster ride.

This book was published in 1999 and here I am over 20 years later and I cannot shake how much this book captured me. You can hate the book, you can love the book, but you will feel emotions. Colonel Behrani was wealthy and important in Iran, but as an immigrant to the US, he no longer has that status attached to him. Kathy Nicolo is American born, but she struggles with addiction and doesn’t have much to her name. You want each to succeed for different reasons, but there can only be one winner.

The truth is life is full of joy and full of great sorrow, but you can’t have one without the other.  – Andre Dubus

Read the book…see the movie to feel the joy and sorrow.”

The Garden of Last Days, by Andre Dubus III

In his stunning follow-up to the #1 best-selling House of Sand and Fog, Andre Dubus draws us into the lives of three deeply flawed, driven people whose paths intersect on a September night in Florida. April, a stripper, has brought her daughter to work at the Puma Club for Men. There she encounters Bassam, a foreign client both remote and too personal, and free with his money. Meanwhile, another man, AJ, has been thrown out of the club, and he’s drunk and angry and lonely. From these explosive elements comes a relentless, raw, and page-turning narrative that seizes the reader by the throat with psychological tension, depth, and realism.