STREAMING TV: Fargo, Arkansas, Unbelievable, and The Haunting of Hill House Round Out This Week's Streaming Selections

The year 2020 has had it’s share of awful news (understatement alert), often at a level previously unseen in our lifetimes. But every once in a while a bright light shines through. And this is one of them: Fargo, Season 4 finally will be here; the new season arrives on FX on Sunday, September 27.   Two one-hour episodes will be unleashed on September 27, with both of them available the next day on Hulu.

In case you unfortunately missed the previous three seasons, please be aware that Fargo is the ultimate must-see TV event, easily on par or perhaps surpassing other award winning dramas such as Breaking Bad, Ozark, and the Sopranos, to name just three.

Each season is one complete story, but are all tied together by generations of characters and families living in and around Minnesota and the mid-west. Initially inspired by the iconic Coen Brothers movie of the same name, the Fargo TV universe has grown into a series of interwined stories, from the late 70’s through the 2010’s.  Season four travels back to the 1950’s where two mafia families battle to control the Kansas City criminal empire.

What makes this show so special?

It’s the dark humor prevalent every episode. It’s the odd, entertaining characters every season offers, all of them with their little quirks, issues, backstories, and personalities. Besides the brilliant writing, visuals, and soundscape, above all is the great cast we’re awarded every season. Take a look:

Martin Freeman is Lester Nygaard, clearly inspired by the original movie’s cowardly, inept salesman. He is the perfect embodiment of the main theme of this show: seemingly innocent people pulled into doing bad things, perhaps out of their control, though in fact we don’t really know if they reluctantly shifted to the dark side, or was a part of their DNA already.

Colin Hanks and Allison Tolman team up as the local police force working on the murder cases springing up in their quiet little town, unaware that what they find is an evil they couldn’t imagine would one day invade their simple town.

Kirsten Dunst and Jesse Plemons are the innocent couple pulled into a dark web they can’t escape thanks to their accidental killing of the son of the Fargo, North Dakota crime family, led by it’s matriarch, the screen legend Jean Smart. Ted Danson and Patrick Wilson are the father-in-law and son police team trying to uncover the secrets behind a triple murder.  Once again, all of these stories merge eventually, but your eyes won’t believe the roads traveled in order to get there.

If season one whets your appetite, season two locks you into this television franchise forever.

It’s Ewan McGregor and Ewan McGregor, playing twin brothers: Ray is the probation officer, struggling in life and forever jealous of his brother Emmit. With his girlfriend’s help, Nikki Swango (yes, Nikki Swango, is her name, of course), Ray comes up with a plan to get rich quick by stealing his brother’s vintage stamp. Chaos ensues.

The two true stars of Season Three is Nikki, played mischievously perfect by Mary Elizabeth Winstead, and the big bad of this season, V.M. Varga, the mysterious and terrifying villain portrayed deliriously great by David Thewlis.

Creator, writer, director, and master of all of this television creation, Noah Hawley, has described season 4 as the biggest thing they’ve ever created so far, per this Collider interview “The cast is incredible. I would say it’s twice the size of any story we’ve told, both financially and the scope of it, the scale of it, the period of it. There’s no reason to do this again unless I think it could be the best one yet.”

Synopsis: The fourth season is set in 1950 in Kansas City and the story follows two crime syndicates as they vie for control. The cast is led by Chris Rock, who plays Loy Cannon, the head of a crime syndicate made up of black migrants fleeing the Jim Crow South who have a contentious relationship with the Kansas City mafia.

THE HAUNTING OF HILL HOUSE -- Netflix

Sustaining tension and horror over ten one-hour episodes is not an easy accomplishment. This Netflix adaptation of the Shirley Jackon novel get its done, making it a must-see TV series for fans of psychological terror, family trauma, and a haunted house filled with generations of bumps in the night, and things a whole lot scarier.

The series tells the story of the Crain family of today, siblings battling their own inner demons as well as each other, while scenes shift to the past, where we watch the life they led in the family mansion, and the strange events taking place in that dark, looming edifice.

Variety calls it “an effective look at overcoming trauma” describing the way they slowly reveal the suffering the siblings endured….

“With brutal effectiveness, “The Haunting at Hill House” will fill viewers’ hearts with dread, not at the ghosts and apparitions that do, indeed, play a role, but at the wages of time and of pain that’d be easier shared but that’s impossible to talk about.

The clever idea to widen the aperture of a horror tale — to tell the story after the haunting seems to have ceased — has given viewers a very special show, one that knows the scariest hauntings are not by ghosts but by memories.”

Another great reason to watch this often terrifying series:  Season Two arrives this year.  This time it’s an adaptation of another classic story. Per Entertainment Weekly:

A series of first-look photos, released Monday, lift the veil on The Haunting of Bly Manor, the next season of Flanagan’s Netflix anthology series. While Hill House was inspired by the Shirley Jackson horror story of the same name, Bly Manor takes its cue from Henry James’ 1898 tale The Turn of the Screw.

Look for The Haunting of Bly Manor in 2020 with it’s official release date to be announced soon.

It's time to get ready and put aside 9+ hours for Mike Flanagan's next release. Official release date has not been announced, but it will be in 2020!

‘The Haunting of Bly Manor’: Netflix Release Date and What to Expect (via @whatonnetflix) https://t.co/3Q1K0KbECs 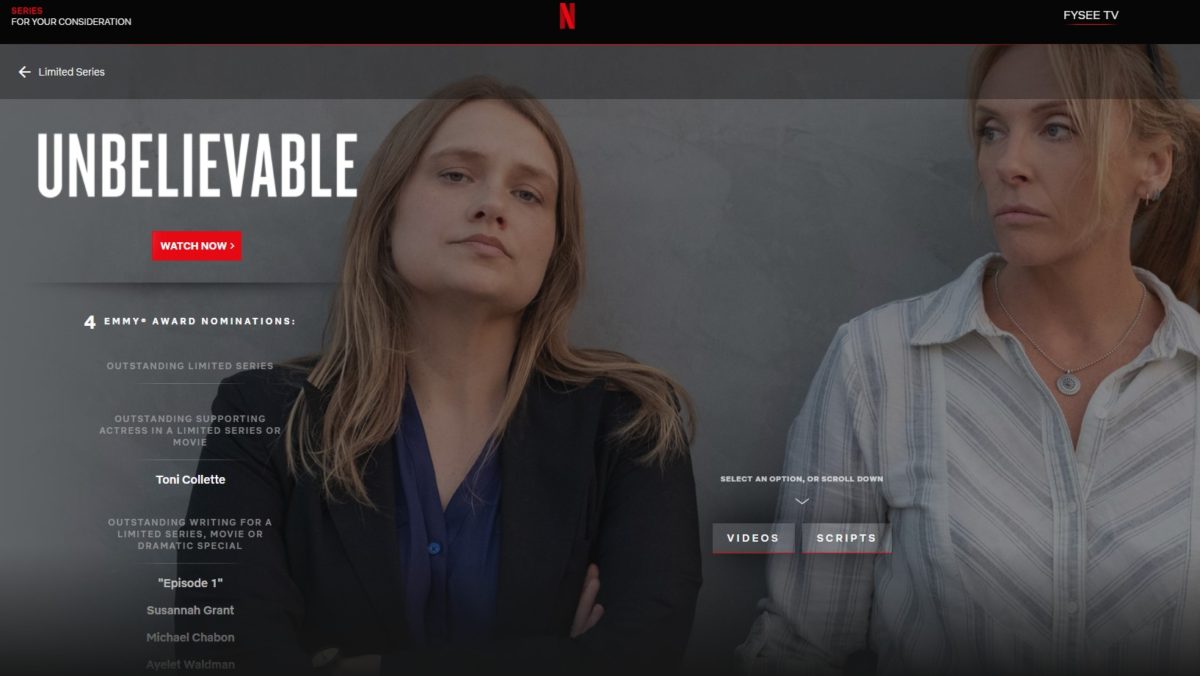 The Netflix limited series Unbelievable is based on the sad, moving true story of a young woman falsely accused of lying about her rape by an unknown assailant, as detailed in the 2015 article “An Unbelievable Story of Rape”. This eight episode series is one of six television series with an Emmy nomination in the category of Outstanding Limited Series, along with Mrs. America, Little Fires Everywhere, Unorthodox, and the likely current favorite, Watchmen.

The show does not focus primarily on this young woman, played by Kaitlyn Dever (Justified, Booksmart). Instead, much of the time is spent with the two detectives who stumble on her case after following similar rape cases in their area, played by two veteran actresses who really make this series must-see viewing: Merritt Wever (Nurse Jackie, New Girl, Godless, Marriage Story), and Toni Collette (Sixth Sense, Little Miss Sunshine, Hereditary, Knives Out, I’m Thinking of Ending Things).

A difficult story and often a difficult, disturbing watch, the noble efforts the two detectives put forth provide us with a level of humanity and perseverance we need right now, a spark of light in a dark year.

A crime drama that would fit right in with the Coen Brother’s universe, Arkansas tells the tale of two low-level crooks who become reluctant partners, hiding in plain sight, and trying to figure out a way out of the mess they fell into.

Mix in Vince Vaughn as the mysterious crime boss, John Malkovich as the team’s leader by force, and Liam Hemsworth (brother of the Mighty Thor’s Chris) playing the brute AND brains of this pair of would-be criminals, and you end up with an engaging, often comical, story. Imperfect it may be in parts as it’s a narrative we’ve seen before, there are just enough unexpected turns throughout this tale that you’ll find yourself satisfied with the results and the story it tells.

Arkansas was a film scheduled for a theatrical release on May 1, 2020, but it is another movie shifted to a Video on Demand release this year. It’s available now to subscribers of Amazon Prime.

The Coen Brothers: This Book Really Ties the Films Together

From such cult hits as Raising Arizona (1987) and The Big Lebowski (1998) to major critical darlings Fargo (1996), No Country for Old Men (2007), and Inside Llewyn Davis (2013), Ethan and Joel Coen have cultivated a bleakly comical, instantly recognizable voice in modern American cinema. In The Coen Brothers: This Book Really Ties the Films Together, film critic Adam Nayman carefully sifts through their complex cinematic universe in an effort to plot, as he puts it, “some Grand Unified Theory of Coen-ness.”

Be sure to check out our HOME PAGE for all of our latest weekly newsletters!